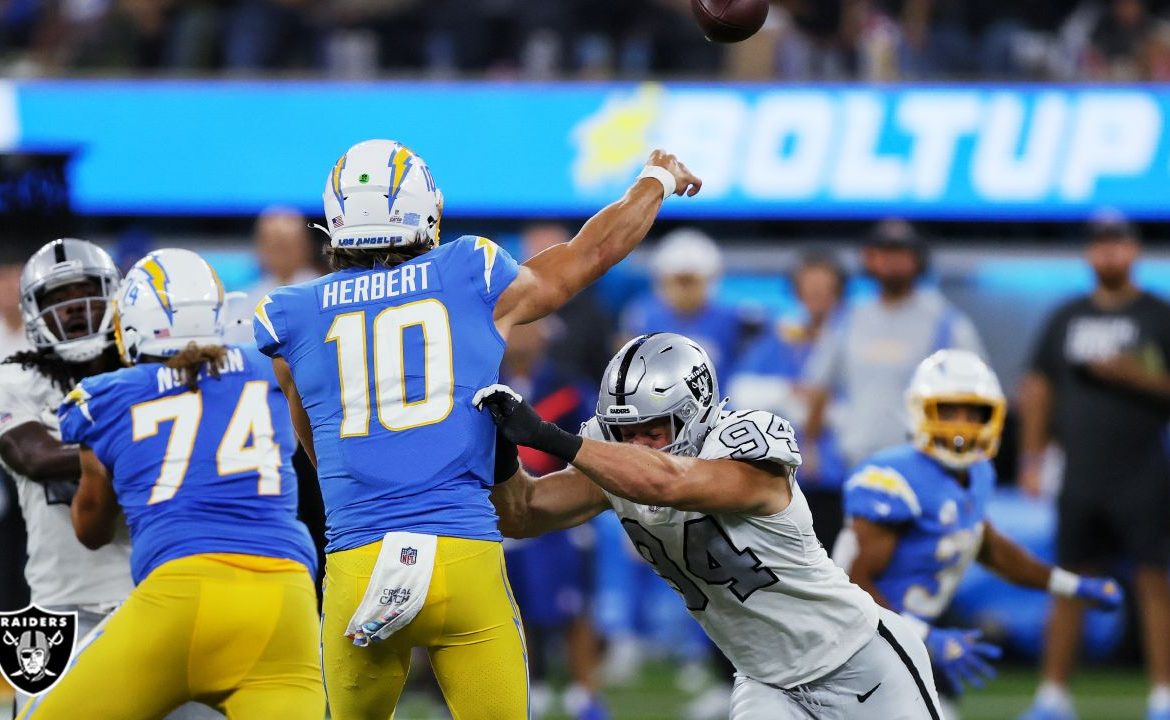 Leading into Monday Night Football there were two undefeated teams in the NFL, the Arizona Cardinals (4-0) and the (3-0) Las Vegas Raiders. The Baltimore Ravens took care of the undefeated Denver Broncos who were (3-0) going into Sunday leaving Vegas as the only AFC team without a loss and giving them a chance to take sole possession of 1st place in the AFC West on MNF against division rival Los Angeles Chargers.

Derek Carr came into Week 4 as the NFL’s leader in passing yards with 1,203 and by a wide margin as next closest was Buccaneers’ Tom Brady with 1,087. This came with their starting running back Josh Jacobs out of Week 2 and 3 contests but was adequately and surprisingly supplemented with Peyton Barber along with the high-priced free agent signing in the off-season Kenyan Drake. It was Barber last week with a stat line of 23/111/1 along with 3 receptions on 5 targets for 31-yards, Kenyan Drake provided 8 carries for 24-yards and 3 catches for 63yds through the air. Jacobs was activated for MNF to go along with Carr and the Raider’s prolific passing game.

The Chargers coming off an impressive and statement game visiting Arrowhead and defeating the Kansas City Chiefs 30-24 in the previous week looked to defeat the Raiders and tie atop the AFC West Division. Their QB Justin Herbert through local and national media is being hailed as an heir apparent to the next generation of great quarterbacks. Herbert who was the 2020 season offensive rookie of the year has been giving Chargers fans a lot to be excited about but struggled in the first two weeks aside from yardage this season. He and his assortment of great weapons look to help balance out to what has been a poor run defense by LA to victory on MNF.

This is the first time since 2002 the division rivals both met with an above .500 win percentage.

The brand new 5 billion dollar SoFi Stadium, which has a roof but has openings on its side, experienced a 35-minute weather delay due to lightning. The film crews had to fill 30 minutes of dead-time but when play was allowed to begin Justin Herbert and the Charger’s offense wasted no time by ending the opening drive with a 4-yard touchdown pass to tight end Donald Parham Jr.

The Chargers blew the doors open in the first half by jumping out to a 21-point lead while leaving the Raiders scoreless. Jon Gruden questionably started the game running the banged-up Josh Jacobs and we saw last week’s star Peyton Barber leave in the 1st quarter with an injury not to return. It seemed Gruden was outcoached as the offense went scoreless in the team’s seven 1st-half drives, even with the injured, patchwork of an offensive line the play calling and execution seemed far off.

Derek Carr was 7 of 13 for 52-yards in the first half while Herbert accounted for 3 touchdowns which two of which were on Los Angeles’ last 2 drives of the half.

The Raiders were held to just one first down and a net of 51 total yards, but to their credit made adjustments at halftime and scored on their first two possessions of the second half.

Las Vegas’ pass defense kept the LA outside weapons of wide receivers Keenan Allen and Mike Williams in check but could not contain the tight ends which included Jarred Cook from getting work done with his 6 receptions for 70 yards and a touchdown. The real killer that kept drives alive and kept them scoring was the Chargers’ prolific running back Austin Ekeler who went for 15 carries for 117-yards and a touchdown while adding 3 receptions for 28-yards and another touchdown.

While the Silver & Black came out with a comeback they could not maintain it, they drew closest with a Carr to tight end Darren Waller touchdown pass to leave them trailing the ‘Bolts’ 21-14 with just under two minutes left to play in the 3rd quarter.

In the 4th quarter, the Chargers finally answered the Raiders’ scores with an 11-yard rushing touchdown by Ekeler, and after the PAT put them up 28-14. Las Vegas pressed to score were driving in Chargers territory but a 15-yard pass attempt to Waller was intercepted by LA safety Derwin James with just over three minutes left in the game which in turn helped seal the victory.

Derek Carr finished the game 21 of 34 for 196 yards, two touchdowns, and an interception.

Las Vegas had a true test with the Chargers and with no running game, almost pulled out of it.

The Raiders (3-1) will have to try to get healthy after a list of added players to the injury report as they prepare to host the Chicago Bears (2-2) at Allegiant Stadium.

Los Angeles finds itself the favorite to win the AFC West after defeating the Chiefs in KC and winning at home against the undefeated Raiders.

The Chargers (3-1) will have another home game playing host to the (3-1) Cleveland Browns.

How to Stay Safe on Your Snowmobiling Adventure

There are precautions that need to be taken when heading out to maximize fun and ensure everyone has a...

Why You Should Buy Your Own Snowboarding Gear

Although you can easily find available rental options, you should check out this guide to discover why you should...

For the Love of the Game: How To Have More Fun Playing Golf

There are enough things in the world to make you frustrated. You should learn how to have more fun...

What to Inspect For Before Buying an Older Home